For the weekly newsletter, text LATINMASS to 22828
St. Joseph hosts the celebration of Mass according to the Roman Missal of 1962 (Traditional Latin Mass) for the Diocese of Jefferson City. This Mass is celebrated every Sunday at 12:00 noon. 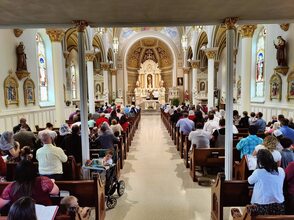 Within the Catholic Church, there are various ways of celebrating the Eucharistic Sacrifice, the other sacraments, and sacramentals. These  “forms” or  “usages” are distinct expressions of the single Catholic faith through different ways of carrying out the liturgy. These forms and uses often involve distinct sacred languages, gestures, rituals, etc. These differences are most obvious when we compare the Roman Rite of the Latin Church with various liturgical rites of Eastern Catholic Churches. Nevertheless, even within the Latin Church, there is a diversity of ways of expressing the Roman Rite.

In 2007, Pope Benedict XVI established that:

"The last version of the Missale Romanum [Roman Missal] prior to the Council, which was published with the authority of Pope John XXIII in 1962 and used during the Council, will now be able to be used as a Forma extraordinaria [extraordinary form] of the liturgical celebration.  It is not appropriate to speak of these two versions of the Roman Missal as if they were “two Rites”.  Rather, it is a matter of a twofold use of one and the same rite. (Letter accompanying Summorum Pontificum)."

According to Pope Benedict's vision, the form of celebrating Mass, the sacraments, and sacramentals as it existed in the Latin Church in 1962, prior to the reforms that followed the Second Vatican Council, is an “extraordinary form” of the Roman Rite, complementing the ordinary form, which is the form of celebrating these rites as revised following the Second Vatican Council. This extraordinary form is also sometimes called the usus antiquior (older usage), the Traditional Latin Mass (TLM), or the Tridentine Mass.

In 2021, Pope Francis restricted the celebration of the older form of the Roman Rite Mass and assigned a more active role to Bishops. The details and implications of these changes are still being studied.

"There is no contradiction between the two editions of the Roman Missal.  In the history of the liturgy there is growth and progress, but no rupture.  What earlier generations held as sacred, remains sacred and great for us too, and it cannot be all of a sudden entirely forbidden or even considered harmful.  It behooves all of us to preserve the riches which have developed in the Church’s faith and prayer, and to give them their proper place." (Letter accompanying Summorum Pontificum)

In other words, the way of celebrating the Roman liturgy prior to the Second Vatican Council is not a threat to the way of celebrating it in accord with the liturgical books promulgated after the Council. Rather, it is a good, true, and beautiful part of our heritage as Roman Rite Catholics, worth preserving and valuable for the worship of God and growth in sanctity today as it has been over the centuries.

Other features of the extraordinary form include:
Diocesan Articles on the Older Form of Mass
Church Documents
Learning More
Recommended Books